By Jen BoxerSeptember 9, 2019No Comments 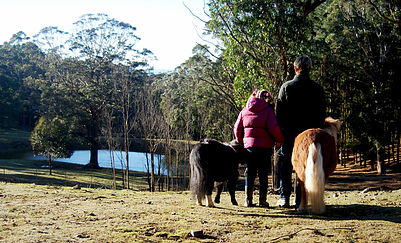 Reprinted from an article in the Blue Mountains Gazette

It’s a new therapy being pioneered by a Katoomba child psychology practice.

The “heads and tails” therapy has been developed by Kids and Co clinical psychologist Anna Cohen and “equine coach” Emma Caldwell who works with patients on a farm at Hampton, 30kms west of Blackheath.

Dr Cohen specialises in the assessment of young people with psychiatric, emotional and behavioural problems.

With a herd of “minis” with names like ‘Magic Spell’, ‘Mirror Image’ and even one with some attitude called ‘Arnie’, she is literally working wonders with hard-to-crack children.

Dr Cohen said some of the children were being referred on to her after other clinical therapy had stopped working.

“The results have been mind blowing. Kids who have suffered from major depression are back to the normal limits of moods through the equine work.”

A long-time rider, Dr Cohen said horses were introduced into the practice after she watched her own daughters “negotiate some tricky stuff emotionally alongside their equine friends”.

The project spent 18 months in development and was originally piloted with larger horses, before they opened last November with miniatures.

“Working with horses is usually out of most peoples’ comfort zone and this creates great immersion learning. They are also social herd animals with distinct personalities, attitudes and moods – they can be playful, cooperative, stubborn and challenging.

“The main goal is for the child, young person or family to learn from the patterns that show up in a session, and to either develop or shift those patterns in a safe environment with the help of horses.”

“For instance if a child is struggling with making friends, we find the horse may be a bit standoffish and we can talk to the child about what they can do to bring that horse in close.”

Dr Cohen has been using animals as therapy in her practice for seven years. A spoodle in her Sydney office acts as a regular icebreaker moving from room to room as needed.

Dr Cohen said they were in the process of collecting data after dozens of children had been helped. She plans to write a paper or publish a book on the results of the equine psychology practice.

“I don’t know of anyone in the world combining miniature horses with both senior clinical psychologists and equine specialists,” she said.

“Equine therapy has grown in the last five years in Australia for treating problems with mental health and trauma.

“That’s not to say that equine therapy is hugely effective used alone – it’s a complementary therapy that works together with other therapies.”

This site uses Akismet to reduce spam. Learn how your comment data is processed.