Duplicated from The Daily Telegraph – April 25, 2015
Written by Lisa Mayoh

Ponies are being used in an effort to help teens struggling with eating disorders, self esteem and communication – in a new form of “Equine assisted” animal therapy.

The “heads and tails” approach is being pioneered by leading Sydney child psychologist Anna COhen and equine specialist Emma Caldwell, who take patients to a farm at Hampton, two hours from Sydney for the specialised therapy run through Kids and Co Clinical Psychologists.

“The horse can identify the child’s true emotional state and can mimic tell signs and behaviours showing children how they are acting in a non-judgemental way, and what they are feeling by engaging with the horses,” Dr Cohen said.  “The primary goal of the approach is assisting teens in both identifying and managing their behaviour and emotions and using communication and social skills to interact effectively with others. This treatment addresses personal confidence and self-esteem, interpersonal effectiveness and ommunication, trust and limit setting and boundaries, as well as group cohesion when in the family context.”

Dr Cohen said the main goal of the therapeutic approach was for the young person to learn from the patterns that show up in a session and change those – with the help of the horses.

“Horses, and in our case miniature horses, respond best to confident and congruent body language,” she said.

“They are acutely able to sense incongruity and will display confusion until the client is internally consistent and regulated, so horses accurately reflect the internal state of those around them.

“Although intuitive, horses do not care what a human thinks as long as the person is honest about it – if a horse detects a lack of congruence, they will typically respond as if they are threatened.”

She said the issue of incongurence was common when children and young people who have psychiatric problems, such as with eating disorders or anxiety. 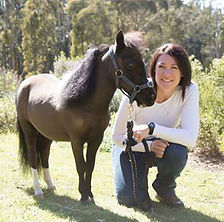 “For instance, with a young person who has an eating disorder they insist that they are fine, however there body language communicates something different – the horses perceives this and acts accordingly.”

This site uses Akismet to reduce spam. Learn how your comment data is processed.